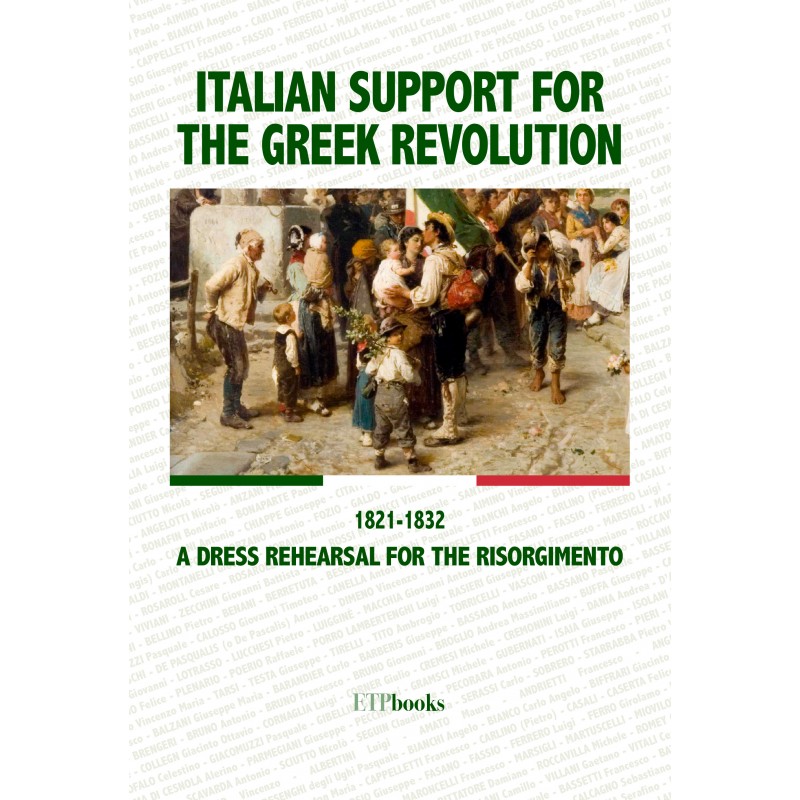 Italian Support for the Greek Revolution

Italy, which at that time was still not united as a State, offered its support not only for the common independence aspirations of the many individuals who were encouraged to go beyond the Adriatic, but also operated on multiple fronts on the territory of the individual states of which it was composed. Those who went to Greece by vocation or forced into exile were joined by many individuals from Italy who offered political, logistical and cultural support, thanks to the centuries-old exchange that had taken place with the Greeks who had visited our cities, studied at our universities and experienced our society, nurturing an economic and cultural exchange which was, when the time arose, a very fertile ground for collaboration and solidarity. The essays presented here deal with topics, facts and characters that we deemed significant in order to help us at least understand to what extent and how widespread the involvement of the Italians had been. We have deliberately not focused on military issues as very often they represent only the final act of political and intellectual pathways, but the contributors have emphasised the multiple forms and directions in which support had developed.  Therefore, in addition to the most humble but no less important collaborations offered by the many - more or less unknown – authors in ports and cities, are works of individuals such as, for example, Vincenzo Gallina and Alerino Palma di Cesnola, who were not only awarded but held prestigious positions in the nascent kingdom of Greece, or Giuseppe Chiappe, who provided information from Hydra for a considerable time, or Giovanni Romey, a forerunner spy who informed the Committee of Zakynthos from within the Ottoman ranks. Equally important were Porro Lambertenghi and Giacinto Provana di Collegno, who not only kept the Philhellenic sentiment alive in their homeland, but went to Greece to lend a voice to the facts. Or the countless doctors who volunteered, so much so that the first pharmacy, in the modern sense, in Greece belonged to one of them, commemorated by a plaque placed in Nafplion. And how can we forget those who, in the fields of art, music, theatre and literature, worked to amplify the independence and libertarian demands of Greece?